The former Hawaiian congresswoman and 2020 Democratic presidential candidate announced this week her party “is now under the complete control of an elitist cabal of warmongers driven by cowardly wokeness, who divide us by racializing every issue and stoke anti-white racism, actively work to undermine our God-given freedoms enshrined in our Constitution, are hostile to people of faith and spirituality, demonize the police and protect criminals at the expense of law-abiding Americans, believe in open borders, weaponize the national security state to go after political opponents, and above all, are dragging us ever closer to nuclear war.”

Tulsi expressed what drove me to leave the Democratic party when I was 22 years old, a year after I was graduated from Hunter College.  I realized that the welfare-warfare state—the essence of LBJ’s Great Society spending spree and the Vietnam War–was undermining prosperity at home and killing hundreds of thousands innocent Vietnamese and other nationals.  In short, I became a libertarian by the early 1970s after I joined the GOP as a limited government advocate in 1969.  And when President Nixon imposed wage and price controls in August 1971 and did not end the Vietnam War after more than two years in the Oval Office, I concluded the welfare-warfare state was firmly entrenched in DC and left the GOP.

As you read the rest of Tulsi’s statement or listen to her passionate denunciation of the anti-civil liberties, you must wonder will Tulsi join the GOP or the Libertarian Party and become a 2024 presidential candidate?  Time will tell if she has the proverbial fire in the belly to enter the presidential race either as a Republican or a third-party candidate. My best assessment is that Tulsi will test the waters for a GOP presidential race, and if she does not become a candidate, she would be the most attractive vice-presidential GOP nominee in many decades.

For more than five decades, the welfare-warfare state has been embraced by the Washington political establishment, even though Republicans talk a good game about liberty, free enterprise, civil liberties, but many of them in Congress rarely embrace a noninterventionist foreign policy.  Thus, would Tulsi be welcomed in the GOP where she would have instant name recognition and be a voice for major components of libertarianism—noninterventionism and civil liberties?  And if she supports the domestic components of a peaceful foreign policy—free enterprise–she would become the national political voice for libertarianism. 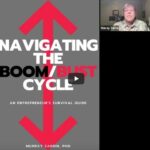