On November 30, Governor Gavin Newsom called a special session of the California legislature in order to talk about price gouging by Big Oil and its connection to high gas prices.

Governor Gaslight rides again. No one, and I mean no. ONE believes Big Oil is the source of our energy woes. Newsom always fails to mention the taxes that California imposes on drivers on top of the base price of gasoline. We pay $2.00 more than the rest of the nation. He also never mentions the special winter blend that simply creates more revenue for his cronies, at a higher cost to consumers. But let him tell it, it’s Big Oil’s fault and here I come to rescue! Taxing energy companies will only serve to add more to our freight. This is what companies do—pass the increases on to the consumer. That’s how economics work. But in Hair Gel’s circus, if he doesn’t mention it, then it doesn’t exist.

And Friday, Newsom unveiled the findings from the Reparations Tax Force. A group of nine Black elected officials, academics, and community leaders tasked with identifying ways the state (meaning me and you) could compensate adult descendants of slaves for injustices and inequities in housing and services. Back in June of 2021 I reported about this on RedState. The first genius idea the group came up with was for the state government to float half of the mortgage for Black homeowners. As usual, paternalism rules with this bunch. No focus on issues like better schooling, better career opportunities, or supporting of small businesses in Black communities. Instead, we’ll just hand you a check or make you beholden to government in order to show how much they really care.

Over a year later, the Reparations Task Force has completed its “study,” and this is what they have come up with:

From the U.K. Daily Mail:

A reparations committee in California has suggested that descendants of slaves in the state could be compensated $223,200 each for ‘housing discrimination’.

The nine-member Reparations Task Force was formed by California Governor Gavin Newsom as part of the country’s largest ever effort to address reparations for slavery.

A focus of the California task force has been ‘housing discrimination’ – it has been estimated that it would cost around $569 billion to compensate the 2.5 million Black Californians for setbacks between 1933 and 1977, according to the New York Times.

Here’s what I find ridiculous about this: California came into the union as a free state. Oh, they’ve done their dirty like everyone else, but they never had an institutionalized system of Black slave labor as other states had. One Twitter troll threw at me an article about how a Mormon (Church of Jesus Christ Latter Day Saints) colony founded in San Bernardino brought Black slaves with them, then conscripted Native American children in order to procure more labor. Mormons have a long history of racism, so this was not a surprise. Awful as this fact is, it is not an example of state-sanctioned slavery, nor is it directly connected to California governance. LDS has a long history of creating its own system of laws, as Sister Wives and Big Love informs us. After Abraham Lincoln signed the Emancipation Proclamation in 1863 abolishing slavery, the Mormon colony quickly fell apart, and their slave labor relinquished.

As far as I am concerned, Native Americans need to be first in line for any reparations. Black Americans? Not so much.

However, discussions are still underway, and the panel is continuing to consider how payments should be made – some suggested tuition and housing grants while others proposed cash.

It has until June 2023 to submit its final recommendations to the Legislature.

Everyone knows Hair Gel is running for president, and in his twisted logic, he thinks virtue signaling on reparations is going to win him the Black vote nationwide.

Gunther Eagleman™ @GuntherEagleman
There is no difference between Joe Biden telling students he will pay their student debt and Gavin Newsom saying he will pay reparations to the ancestors of slaves… BOTH LIES to buy votes.

California lawmakers already twisted themselves into a pretzel in order to return Bruce’s Beach (in the city of Manhattan Beach) back to the family of its former owners, Willa and Charles Bruce, who had it taken through eminent domain. Newsom was there at the transfer ceremony, cheesin’, grinnin’, and hugging on one of the Bruce’s great-grandsons. Along with Los Angeles County Board of Supervisor Janice Hahn, who spearheaded this in order to get a feather in her social justice cap, they glad-handed and patted themselves on the back for all they did to bring restorative justice to the Bruce family.

Once again failing to consider or mention that they have disenfranchised the citizens of Manhattan Beach, who had nothing to do with the 1927 city council decision which stripped the Bruces and 11 other Black families of their land. The Priolieau family is one of those other families. Their members are rightly asking when they will see reparations, the way the Bruces have.

According to a 2021 article, the Prioleau descendants have reached out to both Janice Hahn and the Manhattan Beach mayor. The report says that they have received gracious replies in return.

Yeah, good luck with that.

In a prepared statement provided to Spectrum News, Hadley said that she believes that compensation provided to one affected family must be provided to all — but emphasized LA County’s role in paying restitution.

“Our city attorney has said California cities cannot give public land or taxpayer money to private individuals. That would be an illegal gift of public funds. But the County operates under a different set of rules,” Hadley wrote.

“If they wish to give back the land to the Bruce family and others, the County can do so. I believe most MB residents feel that if one family from a century ago is compensated, all the families who lost their land due to eminent domain should be compensated as well. To date, the County has only mentioned returning land under the lifeguard station to the Bruce family.“

And this spotlights the slippery slope of the reparations conversation. I am an adult descendent of slaves. Both great-grandmothers were born into slavery, but liberated with the Emancipation Proclamation. But my family lineage is not rooted in California; it’s the South and Chicago. So why should I have any claim to reparations in this state?

I am also 1/16th Native American, so, maybe I have a claim there. Oh, right, they’re totally bypassing the race of people who were disenfranchised in the state long before Blacks were.

And consider: these are the same clowns (looking at you, Reginald Jones-Sawyer), who allowed 11 billion of unemployment fraud to happen during the pandemic. Yet, we expect these same people to be able to judiciously and accurately dole out millions in reparations? Who are they trying to kid?

That leaves the most critical question: Where will all this giveaway money be coming from? Especially in light of this news, conveniently released after the November midterms:

California will likely have a $25 billion budget deficit next year, state officials announced Wednesday, ending a run of historic surpluses and acting as a warning to other states about a potential recession.

The deficit will likely lead to some painful spending decisions in the nation’s most populous state. But it likely won’t affect the state’s biggest expansions of government services – including free kindergarten for 4-year-olds and free health care for low-income immigrants living in the country without legal permission.

So, illegals and children, two groups who contribute nothing to the economy, will still receive benefits from those who do. Now that the election is over and Newsom bought the votes he needed with so-called gas rebate checks, the reality is now being allowed to kick us all in the teeth.

sonderangebot_0010 @Sudbury34001015
The truth about Gavin Newsom, and the impact on LBJ’s “Great Soci-shitty.” Reparations is just another welfare program for people looking for a handout, from the sufferings of other people. The US owes descendants from slavery, nothing.
2:21 AM ∙ Dec 3, 2022

Newsom will soon discover that what flies in California doesn’t move the needle in other states. No one cares if California is overrun and destroyed, just don’t come up into their state and attempt to replicate the mess. 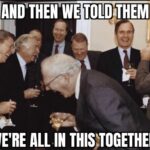