On this hump day edition of Bernie & Sid in the Morning, Sid goes solo as Bernie takes the day off. Sid focuses heavily on President Biden’s summit meeting with Vladimir Putin yesterday and makes it clear that the likelihood of Biden asserting any kind of authority over the Russian President is slim to impossible. As President Trump put it the night before the summit meeting, Biden versus Putin is like your high school football team taking on the New England Patriots. It’s just not a fair match. Other news of the day includes Mayor Bill De Blasio continuing to confuse the hell out of New Yorkers regarding his vaccine mandates, a local Los Angeles news station reporting that at least two parents have accused a school of vaccinating their children without parental consent, the Christmas tree outside the Fox News studios getting burnt to a crisp, and “The View” magpies can’t stop and won’t stop spewing hate and pedaling blatant lies. Senior Meteorologist at Fox News Janice Dean joins Sid in today’s opening hour, followed by former Congressman Peter King, former White House Press Secretary and host of “Spicer & Co.’ on Newsmax TV Sean Spicer, and founding member of KG Law Group Jeff Guzman. No Peerless Boilers Beat Bernie Contest today due to Bernie’s absence, but make sure you don’t miss out on the Wednesday edition of Lidia Reports. 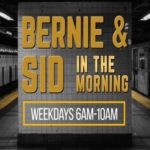