On Wednesday’s Mark Levin Show, anyone listening to this program for the last 3 months knows that a movement of the silent majority is afoot, a new tea party movement. A movement that requires hard work and commitment. When a County Sherriff’s deputies arrest a parent for peacefully speaking out against racism in their public school curriculum, it is a disgrace. America has witnessed BLM and ANTIFA burn and loot, but here a concerned citizen is nearly tackled and arrested. The left cannot continue to abuse red-blooded American patriots of all races. They will exercise their rights to free speech. Parents must be careful of hucksters that will stand on their shoulders to raise funds. Afterward, law professor Kimberle Crenshaw, a so-called pioneer of critical race theory and intersectionality, refused to answer whether or not critical race theory is Marxism. Later, John Lott, President of the Crime Prevention Research Center, calls in to explain how the anti-gun lobby now wants to go after the gun dealers and manufacturers for shooting liability. Yet there is no accountability for George Soros and the likes of similar activist donors electing passive district attorneys that are soft on crime and hard on gun owners and dealers. 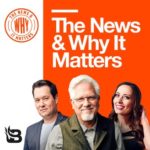