Big shakeup for Twitter’s leadership as CEO Jack Dorsey stepped down on Monday with the company’s technology chief, Parag Agrawal assuming the top post. Dorsey had been serving as the CEO of both Twitter and digital payments company Square and said he decided to leave, because the company is ready to move on from its founders. Salvador Rodriguez, technology reporter at CNBC, joins us for what to know about the leadership change.

Next, some hospitals have been preparing to lose staff over vaccine mandates. Up to 30% of hospital workers aren’t vaccinated and could face termination. In some areas, a reduction of staff could cause disruptions to services. We are also learning that a federal district court in Missouri just issued an injunction temporarily blocking the mandate in 10 states. Julie Wernau, health and medicine reporter at the WSJ, joins us for more.

Finally, love them or hate them the holiday office party is back. This year employees could be in store for a few iterations. The virtual parties are back, but with lessons learned. They won’t run as long and could include a box of food or crafts. The in-person party also makes its return, but much in much smaller groups. Rani Molla, senior data reporter for Recode at Vox, joins us for what to expect. 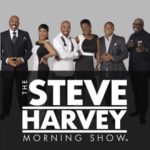